FairPlay is an automated system that evaluates player reports and behavior, and dishes out warnings & penalties to offenders. Initial punishments are very light, but consecutive offenses will ramp up the severity.

FairPlay exists to ensure good sportsmanship, which leads to a more fun game for everyone!

A "leaver" is a player who abandons the game early by quitting or disconnecting.

An "AFKer" is a player who remains in the game, but isn't doing anything (Doesn't build fighters, train workers, hire mercenaries, or chat).

A "griefer" is a player who intentionally tries to lose the game or otherwise sabotage their chances of winning.

A "toxic player" is a player who is verbally abusive in chat, spam pings, or is otherwise disrespectful to other players in the game.

All flagged behaviors can ruin the game for your teammates, but some offenses are accidental, while others are intentional. Because the system can't distinguish a player's intent, it relies on Player Reports to determine the severity of strikes to give to an account.

The more reports a player receives, the more confident FairPlay is that an offense was intentional and more strikes will be given.

However, even with 0 reports, FairPlay collects a lot of contextual information about the game, including, but not limited to:

Based on contextual information & player reports, FairPlay will add strikes against a player's account. If a player has enough strikes against their account, they will receive a punishment. On the other hand, each game a player plays without any flagged behaviors or reports, their strikes will decrease slightly.

When a player receives enough strikes, they receive a punishment.

Toxic players receive temporary chat mutes, but can still play the game as normal. Muted players start off each game in a muted state; however, allies can choose to unmute them if they wish. Muted players are unable to type in Global Chat.

Punishments start off fairly light, then increase in severity with consecutive punishments.

In post-game, you may see a player marked with a [!]. This means they are being evaluated by the system. 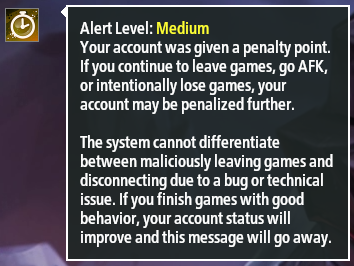 Every player has a "behavior score," which is a numeric score out of 100. This is displayed on your profile. (todo: add picture)
Retrieved from "https://legiontd2.wiki.gg/index.php?title=FairPlay&oldid=911"
Category:
Cookies help us deliver our services. By using our services, you agree to our use of cookies.